Making informed decisions about energy requires understanding where energy comes from (sources) and how it is used. 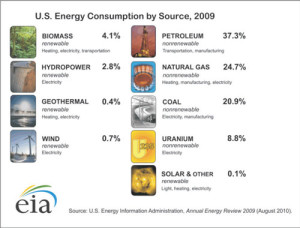 The top four primary energy sources in the United States are nonrenewable – coal, petroleum, natural gas, and uranium. Nonrenewable resources are those that cannot be replenished in a short time period (they are consumed faster than they are able to regenerate). They are extracted from the ground. 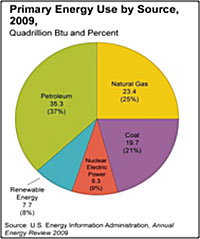 Fossil fuels (coal, oil, natural gas) fall into this category. Fossil fuels formed millions of years ago when plants and animals died, decomposed and were buried under layers of earth. Fossil fuels have high percentages of carbon.

Another way of considering sources and uses is in the graph below, which shows the primary sources of energy and the primary demand sectors (users) of energy in the U.S. This graphically illustrates many interesting things about the way we use energy. For example, we can see that 94 percent of our transportation fuels come from petroleum sources – meaning that we have few options to “switch” to other sources of supply when petroleum prices change or if the supply chain were compromised.

About Imported Sources of Energy

National independence is a common topic in today’s energy conversations. However, there are many misconceptions regarding our dependence on foreign sources of energy. Only 24 percent of total U.S. energy supply was imported in 2009. However, the US imports roughly 60 percent of its petroleum supply on an annual basis. 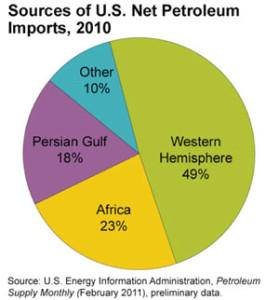 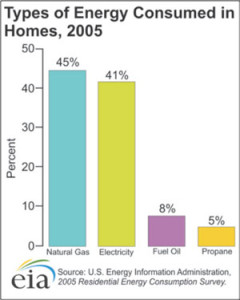 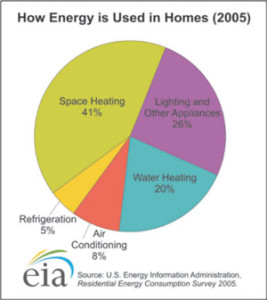 Energy Use in Homes

The statistics are similar for homes in Montana and Wyoming. For Montana homes, the greatest amount of energy consumed is natural gas (44 percent). Most Montana and Wyoming homes heat living space with natural gas. It is used also for heating water. The second most common energy type is electricity at 32 percent of the total used.

Energy Use in Agriculture

Of course, the home energy consumption of most agricultural operations is also significant.

Why does this information matter to me?

The relevance of the sources and uses of energy often relates to your objectives in exploring energy alternatives. For example, if your primary objective in making changes to your energy consumption is to reduce dependence on imported sources of energy, you should focus on reducing or producing transportation fuels. If your objective is to reduce fossil fuel consumption, you may wish to consider your largest use of fossil fuels as a place to start. Is personal consumption higher in transportation fuels or natural gas consumption for heating your home? Understanding what energy sources you are using and how those sources and uses relate to your objectives can help you to align your energy goals.