Hydropower systems, also known as hydroelectric power, harness the energy of flowing water to produce electric or mechanical energy. Hydroelectric installations are the most common and least expensive source of renewable electricity in the United States today. According to the Department of Energy, Energy Information Administration, in 2013 more than 6 percent of the country’s electricity was produced from hydropower resources and nearly 52 percent of all renewable electricity generated in the United States comes from hydropower resources, mostly at large dams. Hydropower, especially large-scale hydropower, is valued for its reliability, with many facilities operating for over 100 years, and low-cost provision of base load electricity. Although few, if any, new large dams are under consideration in Wyoming, the opportunity for installing small hydropower is now more feasible with recent changes in federal policy.

What is Small Hydropower?

While the definition of “small hydropower” varies, this handbook considers a facility that has a generating capacity up to five Megawatts (MW) to be a small hydropower facility. Although termed “small,” small hydropower can generate significant quantities of electricity, which is often sold into utility power markets. For example, a one MW system operating year-round can produce enough electricity for nearly 850 standard Wyoming homes. New small hydropower is also considered to have a low environmental impact and typically utilizes existing facilities, such as already-constructed dams, irrigation canals, and pipelines. According to the Low Impact Hydropower Institute[i], a hydropower facility is deemed low impact when multiple ecosystem qualities are protected, including river flows, water quality, fish and wildlife, and other environmental indicators of a healthy ecosystem around hydropower facilities, as well as meeting recreational and cultural preservation needs.>

Water power is the product of head (vertical drop) and flow. In a typical small hydropower system, water is diverted from a channel into a pipeline or penstock and conveyed downhill to a turbine; this constitutes the flow portion of hydropower. Flow is the volumetric quantity of available water, often expressed in cubic feet per second (cfs) or gallons per minute (gpm). The vertical drop creates pressure at the bottom of the pipeline creating the force that drives the turbine; this constitutes the head portion of hydropower. Head is water pressure created by the difference in elevation between the intake and turbine and is expressed as vertical drop, often expressed in feet, or as pressure, such as pounds per square inch (psi). Head and flow are the two most important components to hydropower generation. A detailed description on how to measure head and flow is described in later sections of this guide.>

In 2012, Wyoming had 16 operating hydropower facilities with a combined installed capacity of 303 megawatts, producing approximately 800,000 megawatt-hours (MWh) of electricity annually. This amounts to 2 percent of all electricity generated in Wyoming. Existing hydropower plants range in size from 12 kW to 66.8 MW.[ii]

There is significant potential for additional small hydropower generation in Wyoming. In 2011, the United States Department of the Interior, Bureau of Reclamation, Power Resources Office conducted an extensive nationwide assessment of hydropower resources at existing U.S. Bureau of Reclamation (Reclamation) facilities[iii]. This resource assessment evaluated the feasibility of additional hydropower development at existing Reclamation facilities. The assessment was targeted towards water users and private developers that could further evaluate the potential to increase hydropower production at Reclamation sites. The study identified 17 potential hydropower sites in Wyoming that included reservoir dams, diversion dams, and canals with a potential to generate 47,187 MWh of electricity annually at existing Reclamation facilities. Of the 17 potential sites, three had a benefit-to-cost ratio greater than 1.0, indicating a potentially cost-effective location for hydropower development. These three sites are listed in the table below.

In 2012, Reclamation conducted an additional study to supplement the 2011 study.[iv] The 2011 study did not fully capture the hydropower potential of all Reclamation conduits. The supplemental assessment report builds off of the 2011 study and identifies potential hydropower sites on Reclamation -owned conduits and determined those sites’ capacity and energy potential. The majority of sites identified are at drops on irrigation canals. Due to the seasonal flows in irrigation canals, and limitations in Reclamation’s assessment tool, the supplemental assessment report focused on identifying the technical potential of hydropower development based on each site’s available head, flow, and proximity to electrical transmission lines, but does not provide an economic benefit-to-cost analysis. The report identified capacity and generation potential, as well as site maps, the number of months of potential generation for each site, and their proximity to electrical transmission or distribution lines. Sites were identified in 13 western states, and Wyoming had the most identified sites. The study identified 121 canal sites in Wyoming with a potential installed capacity of 23,460 kW and annual energy generation of 82,548 MWh. Between the two Reclamation studies, Wyoming’s untapped hydropower potential at Reclamation facilities is over 129,000 MWh. If Wyoming were to utilize this full potential, the new development could supply enough energy to support the average electricity consumption of over 12,000 homes.[v]

Another report by the Idaho National Engineering and Environmental Laboratory for the U.S. Department of Energy, Energy Efficiency and Renewable Energy Office in 2004 assessed the water energy resources of stream reaches throughout the United States.[vi] The principal focus of the study was on low-head (less than 30 feet)/low power (less than 1 MW) resources. The assessments were made by estimating the power potential of all the stream segments in a region, which averaged 2 miles in length. Figure 2 shows the results of this study for Wyoming. 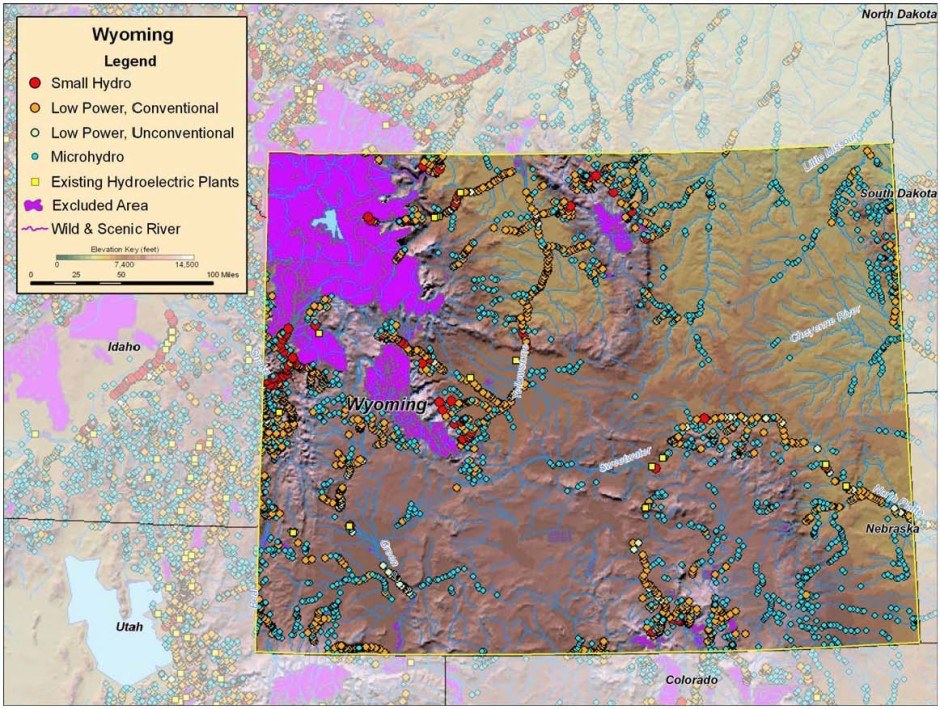 The total available power potential was subdivided into small hydro (one MW or more), low power conventional (less than one MW and heads greater than 8 feet), low power, unconventional (less than one MW and heads less than e8 feet), and micro-hydro (less than 100 kW). This study concluded Wyoming had 2,840 potentially feasible small hydropower projects with 507 MW of potential capacity. Sixty-five percent were classified as micro-hydro projects. Between these three studies, Wyoming’s estimated untapped hydropower potential is over 540 MW of generation capacity. The assessment considers technical feasibility, thus the amount of truly viable new development is much lower.

[i] For more information see www.lowimpacthydro.org

[ii] Based on the U.S. Energy Information Administration’s data, Net Generation by State by Type of Producer by Energy Source (EIA-906, EIA-920, and EIA-923) and Existing Nameplate and Net Summer Capacity by Energy Source, Producer Type and State (EIA-860). (http://www.eia.gov/electricity/data/state)

[v] Based on the Public Service Commission’s estimate the average home consumes 850 kWh/month.